An upgrade for the new Ford Transit Custom key and lock

At the end of 2012 we were treated to an all new Ford Transit van, titled the Ford Transit Custom. In addition to a completely new look, the new shape van features many new and improved safety and security features. The new Transit Custom is said to be as spacious as the old model whilst making a great impression on customers with its  streamlined shape and sexy looks.  See the van and its features on Fords website. 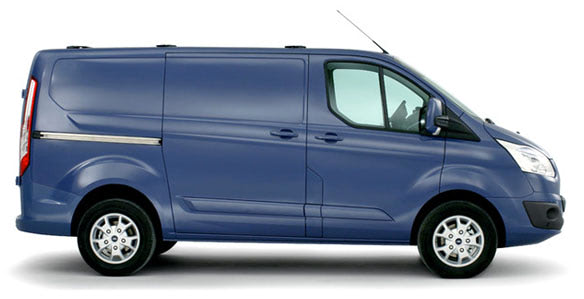 The Tibbe style key has been used on the Transit van since its launch, but the Transit Custom has launched with the HU101 laser style key profile as used by all other Ford models in this year. The Transit was the last Ford model to upgrade to the newer key and this really suprised me. The Tibbe key and locking system has may floors and was well overdue a change.

The Tibbe key is renowned for becoming worn down and smooth on the blade. When this happens the key will stop working in the lock wich means the doors could be locked but the key would then not operate to unlock and open the door. We get called out to hundreds of work vans every year where the key is not working and will not open doors or the bonnett. You can imagine the frustration of van drivers who are unable access their tools or even get into the front of the van to drive to a job.

The Tibbe lock is one of the easiest locks to open and with the right tools and a little practice the lock can be picked with ease. (Self gratification opportunity) ….. I have successfully picked a Transit Tibbe lock in under 10 seconds. This is great news for us auto locksmiths but extremely bad news for Transit van owners who have expensive tools and equipment stored in the back cabin.

I must admit that seeing the new Ford Transit Custom for the first time today I was a tad upset to see a HU101 lock replace the old Tibbe, but to be fair this is great news for the lucky owners of this amazing new van.

The HU101 lock is still positioned on its own in the door rather than attached to the handle like most other Fords. Ford have also left the old black round guard over the lock, so its appearance is still very characteristic of the previous Tibbe lock. The guard also offers  improved anti tamper shielding to prevent forced entry.

Update – After much confusion and discussion with quite a few people at Ford it appears the Transit Custom is not replacing the Ford Transit. The all new style van is a side model, as the Focus Cmax is to the Focus. This means the Ford Transit 2007 shape will continue to be manufactured and sold paralel to the Transit Custom. We’re yet to see a brand new 2013 Transit, but I suspect it will still use the Tibbe key.

A closer look at the new Ford Transit Custom key

We know the new key is using the HU101 security blade profile, but what else is different with the new key and locking system? The key is flip style meaning the blade retracts into the key for compact storage and then flips out from the side at the push of a button when required. Ford have improved the remote locking security by utilising two channels, which means it is virtually impossible for thieves to clone the signal and open the doors. The remote locking functionality of the key runs on a smart battery that automatically charges when the key is inserted into the ignition. It would seem Ford have thought of almost everything with the production of this key and have even gone the extra mile to make the key more durable and waterproof, which is ideal for the hard working traditional van driver. 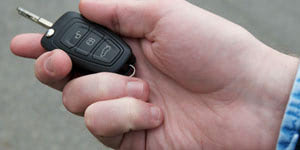 The remote locking system is far superior and allows for just one door to be unlocked independently. The drivers door can be unlocked at the push of a button whilst all other doors remain locked until a switch is pushed on the drievers door.

A much improved alarm system

The usual permitter alarm is available which activates if the doors or bonnett are opened with force. There is an option to upgrade this to a Thatcham cat 1 alarm that sounds a more powerful siren and activates if it detects any movement inside the vehicle or if the van is lifted in any way. This comes complete with a back up battery that will still operate should the vans battery be disconnected.

The new key is a great design although looks quite similar to the Mondeo’s keyless entry three button teardrop fob. Whilst an auto locksmiths job has been made much harder for replacing these keys, the added security benefits of the key profile and advanced alarm system make this a great move by Ford which should be welcomed by new Transit Custom owners. Worn keys and picked locks will be a problem of the past with the all new Transit Custom.